Senate floor sponsor Sen. Mark Madsen, R-Eagle Mountain, said in some states children are being indoctrinated in socialism via some curriculum. 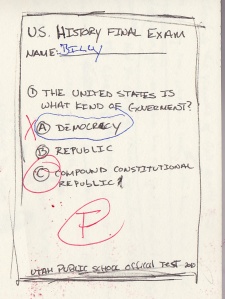 Giving Something a Name Gives You Power

Definition of REPUBLIC
1a (1) : a government having a chief of state who is not a monarch and who in modern times is usually a president (2) :a political unit (as a nation) having such a form of government

b (1) : a government in which supreme power resides in a body of citizens entitled to vote and is exercised by elected officers and representatives responsible to them and governing according to law (2) : a political unit (as a nation) having such a form of government

1a : government by the people; especially : rule of the majorityb : a government in which the supreme power is vested in the people and exercised by them directly or indirectly through a system of representation usually involving periodically held free elections
Compound Constitutional Republic– I could not find a definition. However Wikipedia has a definition of a Constitutional Republic