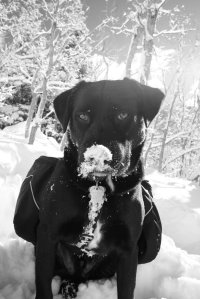 We have had our dog, Leunig*, a black lab mix for almost three years now. We picked him up from the Humane Society one sunny afternoon in November. When we got Leunig, Erin was in her second year of residency so I was spending a fair amount of time alone while she worked insanely long hours. It was great to have someone to greet me when I came home and to hang out with even if he had four legs and did not talk back to me. We took long walks through dark streets in the mornings before I went to work, when I came home we often escaped to the mountains usually to the “Snow Hut” a fort some friends and I had built in one of the canyons. On the occasion that Erin was home and not sleeping, we planed our hikes in the areas Leunig could go, avoiding the watershed canyons like the plague. We took him camping in the High Unitas where he slept in the tent with us. At times I would bring him into the office where he would spend the days laying on the floor happily snoring away as I worked. We skied less at the resorts and went snowshoeing more. Many times on winter nights I would load my skies and Leunig into the car and we would head up to Mill Creek Canyon for a quick skin, he quickly learned to stay away from my ski tips and tails, running ahead of me on the climb up and behind me on the way down. I found a light to attach to his collar because at night in the canyon he disappeared into the darkness. He even had his own backpack.

Erin was five months pregnant when we moved into our house and things slowly began to change. Our jobs had become more demanding and there was yard work to be done so the time that was normally spent in the mountains was now spent working one way or another. Leunig showed his displeasure with this by destroying all the blinds in the house. As we prepared for the arrival of Noah, Leunig looked on with suspicious eyes, knowing something was in the works but unsure of that exactly what it was. When we came home from the hospital we made sure to greet Leunig just as we always had and then introduce him to Noah. For a few weeks after that however we paid little if any attention to him, I am not even sure he got a walk.

When I was laid off from my job and began staying home full time the walks increased a bit and sometimes we even went for runs together. But my running waxes and wanes and soon I found myself hardly walking let alone running. The couple of times I did escape into the mountains I left Leuinig at home wanting some time where I did not have to look after anyone or anything. Soon the anger and hurt of my job loss, I was never given a good reason why I was laid off, and the stress of my new role in life started to come to the surface. I found that I was constantly yelling at Leunig to get out of the way, to move faster, to go lay down, to stop begging and a host of other things that I would never have been bothered with before. Yelling at him was my new release of frustration and anger. I kept telling myself that he now had a yard to run in and he was getting a walk, most days, so he should be fine. Noah was my focus now. After awhile I got sick of yelling all the time, got sick of feeling like crap and was tired of making excuses. So I got myself some therapy and some happy pills and the yelling stopped, the excuses stopped and I began to feel better. We realized we had not been in the mountains for almost a year and to maintain some sense of sanity we needed to make a better effort to get outside.

We will never get out as much as we once did and we know that life will never be like it was when we first brought Leunig home. However I take comfort in knowing that soon there will be a little person who loves him just as much as we do and some amazing new memories will be formed as we embark on grand expeditions as a family.