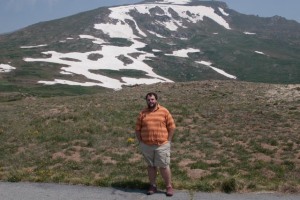 Ed and I once stood toe to toe in our high school locker room. I’ve no idea why nor why the memory is so vivid, but it is.  The death of a mutual friend a week after graduation changed us both. We have been friends since.

Last month Ed completed his first marathon, which you may think is no great thing, but Ed has never been a runner, and over the last handful of years he has lost an entire person in weight. Plus he’s told me on more than one occasion that he hates to run.

I talked to Ed the day after he ran and asked him if he could walk. He replied he felt good and had gone to the gym that morning. A week later he posted that he was running in the 2013 New York City Marathon for a charity that helps to combat  childhood obesity.

Back in the early part of this century when I was in a bad space both financially and emotionally, Ed loaned me money, he was my roommate, and would drag me out into the mountains or to the bar when I was sure I was losing my mind.  During that time I watched Ed try all kinds of different diets that would work and then not work or get so frustrating that he would give up. He never seemed to let the struggle with his weight keep him from doing the things that he loved. Nor did his weight ever seem to bother him. We routinely would go skiing on winter weekends and hike sections of the Long Trail in the summer. He may have not been the fastest person out there, but he was out there. It was not until a few years later as we were walking into a diner after a three-day backpacking trip in Rocky Mountain National Park that I got a glimpse of the struggle that Ed had gone through his entire life.

The marathon that he ran last month and the one that he is running next year, the fact that he has summited Kilimanjaro and routinely hikes 14,000 foot peaks on summer weekends these things are all just a part of why Ed inspires me. He is also a true friend and his drive and determination to create a better life for himself are amazing to see. I have been fortunate enough to watch the entire transformation. When I’m out for a run and I’m just not feeling it, I often think about Ed and all that he has accomplished over the past few years, and I dig a little deeper and I push a little harder.

2 thoughts on “Fast Eddie Is My Inspiration”